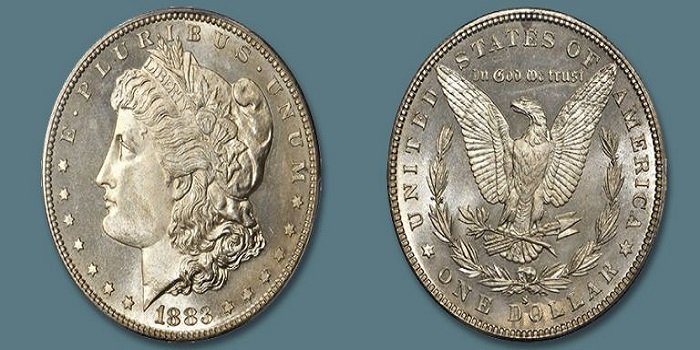 One of the finest known existing 1883-S Morgan Dollars will be offered during the Rarities Night of the Stack’s Bowers 2020 Las Vegas Auction. This rare Morgan Dollar is a surprising challenge to collectors in Mint State. The mintage of this coin was moderately large. At 6,250,000, the 1883-S is one of the few that saw active circulation dating back to the beginning of the 19th century.

While worn survivors are not hard to locate, Mint State coins are extremely rare and elusive in today’s market. With only about 100 coins known, the issue becomes incredibly scarce in Gem. These coins at the Superb level are essentially unobtainable. Even rarer is if the coin has any degree of proof like contrast. The 1883-S Morgan Dollar that will be at the August 2020 Las Vegas Auction, lot 1230, is the sole finest graded coin and is certified MS-67 + PL (PCGS).

To trace back the history of the coin, we start 116 years ago with the Chapman brothers’ sale of the legendary John G. Mills Collection in April 1904. The coin was described as “uncirculated, with Proof surfaces” in lot 767. It was then sold for $2.25 to John M. Clapp. The next time the coin appeared at auction was 93 years later. In April 1997, it was offered as lot 2265 in the Louis E. Eliasberg, Sr. Collection, Part II. At the time, the coin was described as “one of the most important Morgan dollars to come to market in our generation.”

Twenty-five years later, the same assertion is being made of this coin. This 1883-S Morgan Dollar sits at the top of the PCGS Population Report across all categories.

This is the pinnacle of execution and preservation in the coin industry. The coin has a stark proof like reflectivity is seen in the fields of both sides, framing the satiny, radiant devices. Under magnification, every element is complexly defined and virtually pristine.

The sale will be available for bidding and viewing at the Stack’s Bowers website. To secure a copy of the printed catalog, please contact Stack’s Bowers.